A Little about Figure Style

I recently attended a rather enjoyable wargaming weekend to help with running a large C18th game, using Charles's Grant's excellent "The Wargame" rules (other rules sets are available, ......they're just not as good! )

Anyway, the after dinner drinks discussion ranged far and wide, but at one point touched on the fact that the Crann Tara style figures look like they have been on a starvation diet etc.

So, I thought I would do a small visual comparison, between a Crann Tara figure, an Old Front Rank I happen to have, and a scaled down image taken from a drawing book, created to illustrate typical human proportions. Now whilst I appreciate folks come in all sorts of shapes and sizes, it is a useful benchmark I would suggest. 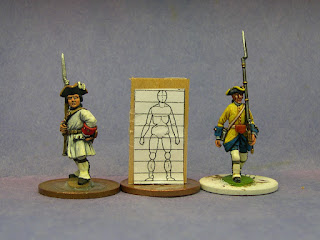 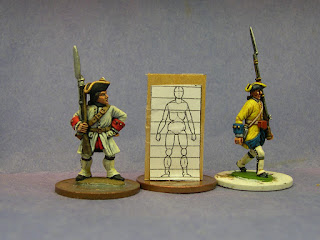 At the end of the day, everyone has there own taste, and I can see why chunky, cartoon style figures are popular (they are so much easier to paint, the head alone being twice the size at least from what it should be), but I know which style looks better to me .... 😉
Posted by John D at 14:49

The figures look lovely John,I have a couple of trial figures-crann Tara/ebor/front rank on the go to see how different makes get on with the oils. The oil with liquin is quite easy to apply with the thickness.Do you have any suggestions for what oil/base work for the french light grey uniform?
Do you have any plans to sculpt Austrians at some stage?
Many thanks
Clive

I agree that the "big-head" style is easier to paint and therefore more attractive to the masses and the results achieved can be truly breath-taking, but as your title says this is about style.

To my mind the Niblett/Hezzlewood/Stadden/Suren's of this world are the champions of the "proportionate" figure and they have "style" by the bucket load.

I'm focused on slowly developing figures for the War of the Austrian Succession in Italy, and so far we've made good progress with Savoia, France and made a start on Spain/Naples. Austria is the next obvious progression, as they were significant players in this theatre.

Definitely on the "to do" list, but its a hobby thing for me, not work, so not setting any timeframe on it.

I think the core issue with bulkier "modern" figures form me is that it tends to make them quite "static" and lifeless when on the table. Sure the big heads give them character when looked at more closely, but they lack a degree of proportionality and elegance as a result.

At the end of the day, I'm making figures for my own purposes and can please myself, and accept that many are hefted to this "modern" style, and don't like the style I'm trying to achieve. For my part, I do often look at the very sorts of figures you are identifying, then look at modern ones and think "how did we end up here?"

I doubt many will change though.

My instinctive response is that most people in the mid 18th century, and especially soldiers on campaign, probably were indeed on starvation diets!

But this isn't a fair criticism of your figures or the rest of the Crann Tara lines. They are well-proportioned and look like real people. The comparison with the Front Rank is telling, oh boy is he exaggerated. To each his own in matters of style but for, my two cents worth, it is the pose and the colours presented by the clothes and flags that have to catch the eye at 28mm on down. Animated faces, no matter how well painted (and this is a strong point for Front Rank) are too hard for me to focus on from across the table.

Keep on doing what you are doing!

Don't forget that Minden Miniatures and Crann Tara are made by the same sculptor, Richard Ansel and so both ranges are comparable with the figures that you are making, in fact, I use a lot of your Savoia figures side by side in my various 18th Century armies. RSM miniatures, made by Steve Hezzelwood, are also compatible with the other figures mentioned above.

I find the figure chart comparing two styles of sculpting very interesting and thank you for posting them on your blog.

Certainly the fact that Richard did the initial sculpting on both ranges has helped set the parameters for them and has meant that they've remained compatible. I know both myself and Andy Stadden (who now does the bulk of the sculpting for Crann Tara, since Richard stopped a couple of years ago) have tried to keep our work within that style to ensure compatibility.

The figure in the photo is a good example. The only elements made by Richard were the hat and the musket, everything else (including the initial dollie) was made by me, yet it still matches well with the rest of our range.

Very interesting John and a subject that has been often discussed at our Wargames club as well. Often it centres around the Dixon ACW range and comparisons to Perry’s etc.

Ultimately it is a matter of taste, but i'm not sure sometimes that folk have actually reflected on it, rather, they just haven't picked up the "drift" that's happened with figure style over the last few decades. I for one "woke up" to it about 10 years ago and just thought "wow these really aren't a step forward from what was being made before, they are just caricatures" Now I know the majority won't agree, and I get that.

King has no clothes perhaps?