Here we have the second of the standing pose units I have in my Savoia Army, Regt Meyer, again painted by the highly talented Mr Jarvis 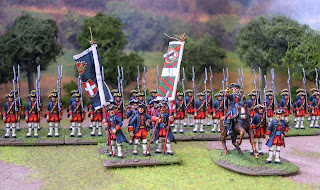 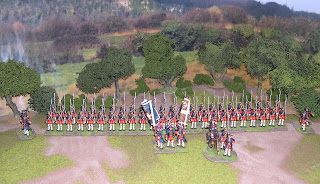 I made two units using this original pose, and then decided to do another one, this time standing, I think it was less successful, and if I was making it again, I would do a few aspects of it differently, however, I do think it turned out to an "acceptable" level, but not my best work. Here's a unit of them, Kalbermatten, very nicely painted by Dave Jarvis. 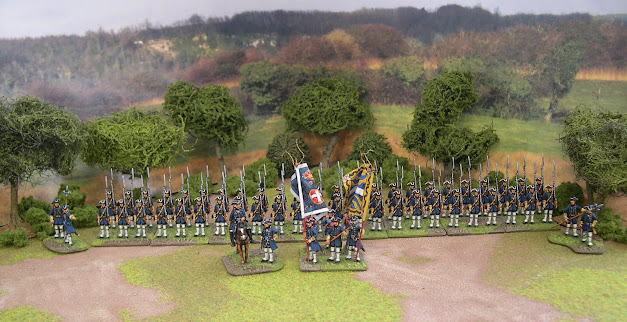 Many moons ago, in fact, frighteningly now over 30 years ago, I was an undergraduate student at the University of Aberdeen, and on cold winter days (and it does get cold in Aberdeen!), I used to head to the library for some warm and a seat in a comfy quiet spot. Formal studies over, I'd look for something interesting to read from the History section and one day I stumbled across a copy of an old book titled "The Defence of Piedmont 1742-48" by Spenser Wilkinson. It was a book published in the late 1920's, largely I suspect for an academic audience, by Spenser, who was a Fellow and Don at Oxford at the time. I have to say that I had no knowledge of the subject matter at all, but the dates looked interesting so I lifted the book from the shelf and started reading ......

It was, quite frankly, fantastic and I was hooked. Yes, it's an academic style history book of it's period, but for those with an intertest of military history of the period it's a gold mine. It features lots and lots of campaign detail, gorgeous maps and covers a period that is so little known, but actually so important in European History of that time. It's a great period, see-sawing in successes and failure from one side to the other. Most English speaking folk, tend to focus on Frederick et al in Northern Europe, but in many ways his theatre and contemporary period offers just as much, if not more, but it's virtually forgotten.

Being a limited run academic book of the 1920's it's very hard to come by and in those pre internet days, and with student poverty in full grasp of me, there was no way I could secure an actual copy for myself. So in the weeks before my final graduation I spent several days, photocopying every single page of it and put it away in a box file for my future reference......

Fast forward more than 20 years later and suddenly I was starting to make figures for this time period, and I thought "what the hell, nobody else is ever going to make these figures, let's give it a go" 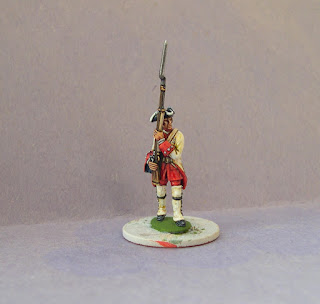 My first ever Savoia figure, a pose that I've grown to value as time has passed, it combines a static pose, but with just enough "movement" in it to suggest it could be a moving figure as well. This was the first "sample figure" that I painted once it had been cast for production. It now resides in John Ray's collection as a small token of my admiration for his skill and the kindness he's shown me with his time and tips and guidance on figure making over the years. 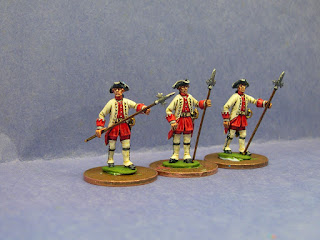 Next came some NCO types (two sculpts) made openhanded  to allow for modification and conversion. 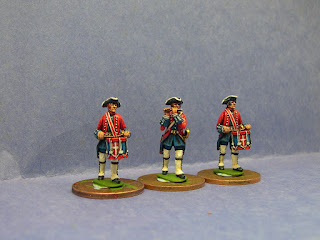 And I did also tweak one of the NCO's to make a bandmaster (never production cast though, sorry Graham) 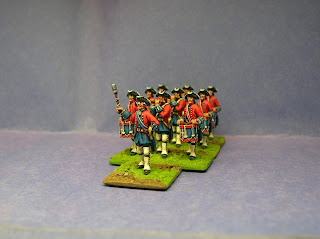 And finally, I did some basic conversions on the coats etc of the existing French Officers from the Crann Tara Jacobite Range to make some suitable command for the first unit. This was the end product

Having done the FdM (actually, from memory, I did the foot figures first and then a few months later did the mounted figures and then finally the Grenadier), I then started thinking about what I might try next. At about that time, Graham and I started going up to see Charles from time to time for a weekend of gaming (often battles which later appeared in Charles's excellent "Refighting History" series). Great discussions, running well into the evening, were often had about potential future figures and directions for the range, generally lubricated with the odd fine beverage from Charles's cellar! (I only made a fool of myself once! 😀) Happy days and great memories.

As some of you may be aware, Charles father wrote a great book on the Battle of Fontenoy, within which features this image (Copyright Charles Grant): 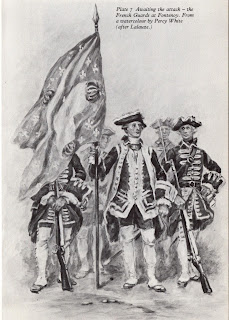 I happened to notice this picture on display at Charles's and it served as inspiration for my next foray at more figures. I made an attempt to recreate (with mixed success) the two prominent figures in the image (the ensign and the Garde) plus a more generic standing Garde figure as a substitute for the chap hidden behind the flag. The result was these: 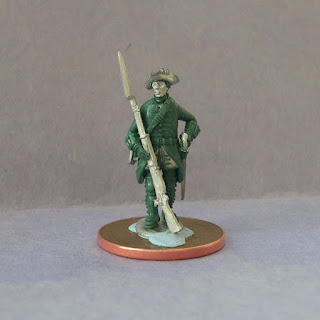 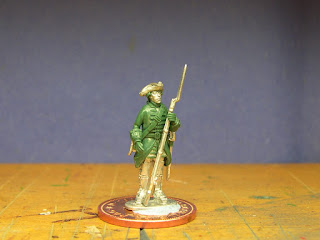 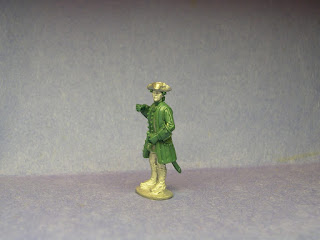 Again, it was a poor choice of figure to attempt, yet more fiddly lace and lots of fine detail. On balance I think the attempt to replicate the Garde on the right of the image was pretty decent, the others more moderate in success. At this point I didn't progress with any more Garde figures, although later I did and I'll show those in due course. Two interesting observations from a "makers" point of view, I've never seen these figures actually used in the configuration/pose they were actually designed for, most folk used them as multiple figures in wider units (you can't control what folk do with stuff once you let it out into wider circulation). Secondly no painted images, because, as of yet, I've never actually got round to painting any of the Garde figures I made, definitely still on the "to do" list. Next time, the start of the Savoia figures ....

How it all started, my involvement with Crann Tara

Firstly, thanks to all for the positivity about restarting posting. Nice to hear from many folk that I respect and admire, and glad you've all got through the last few years.

On reflecting about some sort of structure/logic/narrative to posting images etc, I thought it might be of some interest to talk about my focus over the last few years, which has been making and painting the Savoia (Piedmont-Savoy, from the War of the Austrian Succession) figures and the parallel work helping (at times) with the development of the Crann Tara range. I'll say from the start, that the range exists, due to one person, Graham Cummings, who very much was the driving force behind it, taking it from being a small emerging Jacobite range to one which ultimately covered a huge range of nationalities and troop types for a period covering the middle of the Eighteenth Century. The other significant recognition also needs to go to the late Richard Ansell, the sculptor of the range (and the excellent, and very much compatible, Minden/Fife and Drum Figures), who, in my view, didn't get the recognition he deserved for the quality of work he produced. Sadly, the price of not being instep with "fashion". Perhaps, in time, his work will be better appreciated.

Some of what I'll say, has already been said elsewhere, these are my recollections and my "story" of involvement in this, something, which was a hugely enjoyable and rewarding exercise, in many ways.

My involvement with this range started very informally, through John Ray's "A Military Gentleman Forum". Graham was aware that I'd done some fairly rudimentary (Many might say I still am! 😀) sculpting/figure making, and offered me some dollies and bits and bobs from the range to "have a play" with. I thought I'd have a go, and roughly about this time, Charles Grant, was getting involved in the range too, helping do a lot of the research work on uniforms, potential future figures and the like. I knew that one of Charles's fathers favourite units from the old, spencer smith era, was the Fusiliers de la Moliere (FDM), so I though I'd have a go at them and see how I got on. It was my first go at doing figures in this quite fine, detailed, slim style, and it wasn't easy! Ultimately I made 8 foot figures and 4 mounted for the unit. In my view, they were "ok", inevitably, now, a number of years later, I think I could have done them better in some respects, but they are certainly passable. It was also, in hindsight a silly figure to start with, all that Brandenburg lace and the mounted figures hat/helmet were really difficult to do.

Here's a few pics of the figures I made, painted by myself: 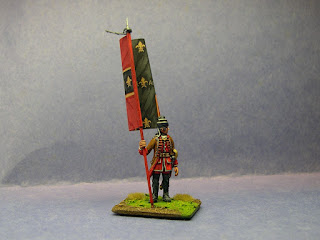 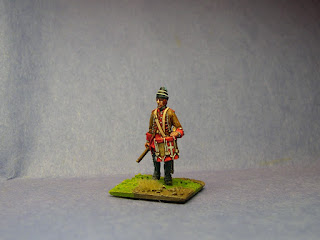 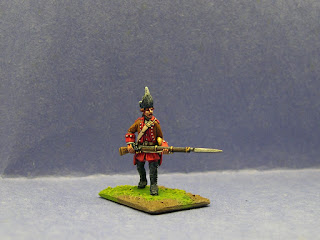 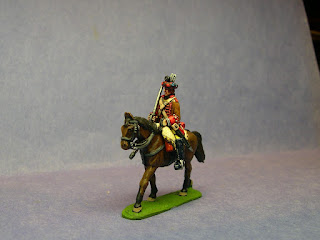 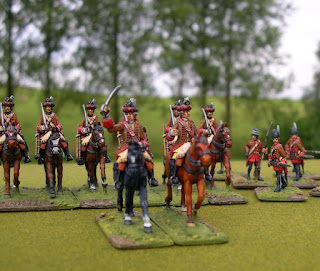 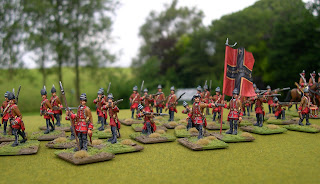 In the interests of potentially restarting this Blog, from it's current deep freeze, I thought I'd post a few images of some of the units and figures I painted up in the last few years, almost all those I'll post are from the Crann Tara range of figures (Now sold by Caliver Books), and the majority shown (like those below) are figures I sculpted and then painted:

In no particular order, first up, some Savoia Cavalry, a few shots under the desk lamp, and one from outside of the whole unit on a sunny day! 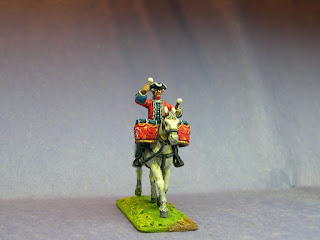 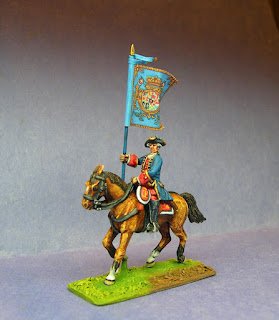 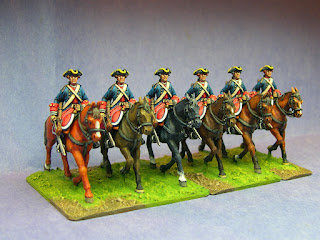 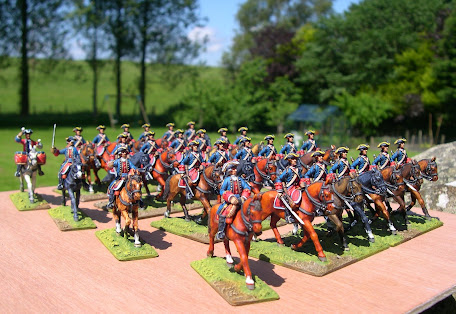 I have a reasonable archive, which I will post up, plus some work in progress as well.

Hope the last few years haven't been too grim for you all.

So with the figures painted, it only remains to bring the shiny and matt bits together, to get a consistent finish to the figure. I do this by varnishing first with a brush on gloss, revell email color no1, and then, once dry I spray matt with Winsor and Newton Professional Matt Varnish. I find this gives a really good overall flat look. 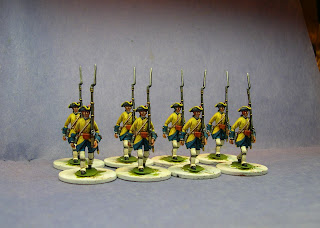 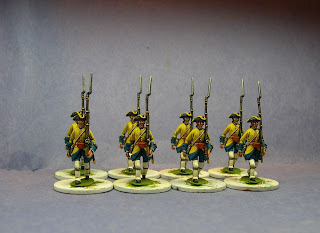 Here is the previous image line up with the addition of a scaled down image of an actual person dressed in a period uniform ..... 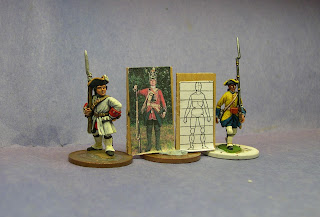 I'll scuttle off now and leave the chunky boys to the feast .......