So here is the first of my Neapolitan Units, and lets start with the main men, The Royal Guard Grenadiers.

For those familiar with such things, Murat had somewhat of a liking for light crimson, or what I like to call pink, and it features in some way with many of the napoleonic units assocaited with him.

This unit is one I painted myself, the castings are mainly hinchliffe foremost range chasseurs of the guard, and a splendid figure it is too. I've done some conversion work on these using a few firing line heads and other tweaks. The officers, standard bearer and drummer are mostly bicorne with head swaps back to hinchliffe to make them a better fit with the other figures and the sapper, and two other officers are hinchliffe, with a wee bit of tweaking.

Anyway, quite pleased with how they turned out. 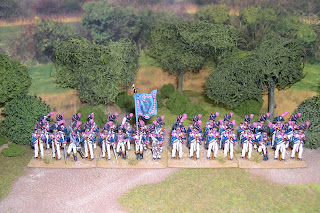 These two units started of life as the first and second Battalion of the Leib-Infanterie-Regiment Großherzog (1st Regt) from Baden. They were an ex WHC centre pair, that were fairly beat up by the time I got hold of them (broken muskets etc). I repaired all the damage, then decided to make one of the battalions into the 2nd Regt (Linien-Infanterie-Regiment Erbgroßherzog). I also did some conversion work to make the flank companies by adding plumes to the helmets and epaulets. All the figures then got a refresh on the paintwork, including adding in the lapels, which didn't feature in the initial paint job they'd had.

Here they are now: 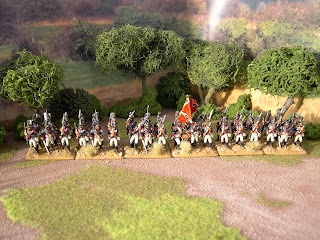 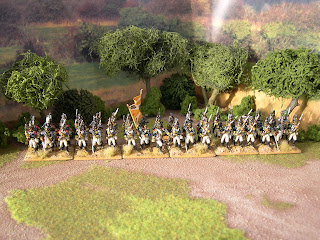 Next time Neapolitans!
Posted by John D at 10:15 3 comments:

The reason for this is that I've been focused on pulling together my 25mm Peninsula Collection and this has taken up all of my hobby time.

One of the reasons I really got into wargaming in the early 80's was those lovely shots of Peter Gilder / WHC Napoleonics which featured in Miniature Wargames and early copies of Wargames Illustrated. Truly inspirational stuff, and in many ways, I believe never bettered since. As a teenager I duly trotted off, bought my Hinchliffe peninsula napoleonic figures, painted them up, stood back, and then thought .... mmm! these aren't quite doing it!

Fast forward the best part of 25 years (ouch!) and I happened to pick up a couple of ex Gilder units, bit of an impulse buy, but too good not to get at the time. I then thought again about Napoleonics, something I hadn't touched during the intervening period. I wanted to go for it, but only if I could achieve that "look", and I wasn't interested in the more "modern" style. I also recognised that with my limited hobby time, I was never going to paint my way there by myself. I'm just too slow, realistically 3 - 4 units a year, and that it was going to be a long timeand that rate of progress before I got any sort of forces that were useable (and I needed both sides). I therefore took the conscious decision that whilst I would paint some units, I would buy figures, certainly till I'd got to a reasonable force. My rules would be that I would only buy old style figures and only top quality stuff, no "fillers" to make up the numbers, I wanted to be able to pick up any base from any unit during a game and just enjoy how lovely they looked. I've subsequently, over the last couple of years, been lucky enough to pick up quite a number of units, both directly from the WHC (before Mike sadly passed away) and on ebay and various others sources.

Anyway, whilst most of the figures I have picked up have been great, it's fair to say that many have seen quite a bit of "action", broken muskets, chipped paint etc. A wide variety of basing styles have also been evident!

I've therefore been working through the collection (slowly) gradually restoring things to their former glory, and in some cases improving them. All are also getting rebased into a consistant style. I've mixed this in with painting the odd new thing myself and it's been a pleasant way to move things forward.

I've now got to the stage where I feel I've made some progress, and can now take stock a bit.

Well, that's the background. Here are some picture, hopefully in a suitable WHC style!

I plan to post up images of the restored units and a few new creations as they come of the production line. 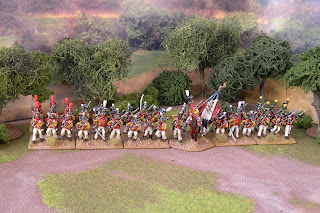 This is an ex WHC unit, it's fair to say it had "seen some action" but deep down it was a lovely unit despite all the war wounds. It's all Connoisseur figures with a few simple conversions. 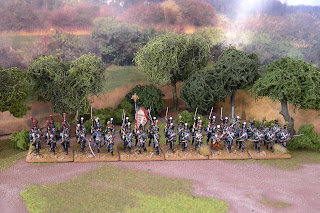 Again ex WHC, although I don't think this particular one had been in action for a while. Hinchliffe figures, yes, they are very much forgotten these days, but there are still some gems in there if you look. Again, this unit needed a bit of "love" but it's back in A1 condition now. 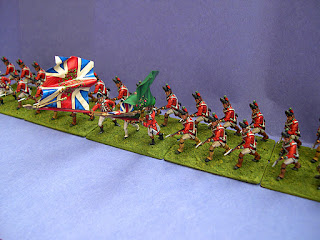 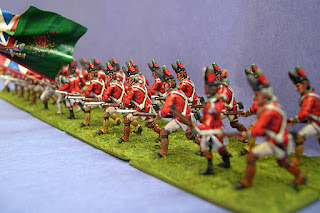 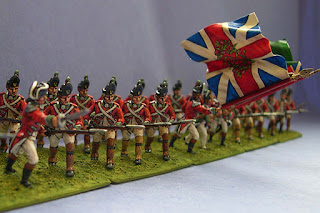 Been deathly silent hear for a long time. Not been sculpting anything for ages, so didn't have anything I thought was worth posting.I've been having a "painting phase" to my hobby time recently. Sculpting has been limited to the odd bit of conversion work on figures.

Finally finished unit of 30 Volunteers of Ireland figures, I sculpted the foot figure a long time ago, but haven't got round to finishing the unit till recently. Command figs are standard hinchliffe with head swops.
Posted by John D at 10:03 4 comments: 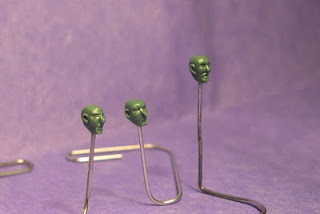 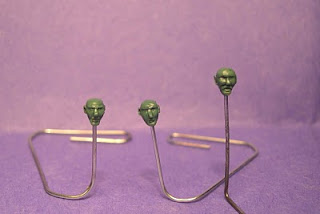 Been Painting more than sculpting recently, but have done another couple of heads, and stuck some ears on the last three to see what they'd be like before I decide whether to junk them or not.

Keep reminding myself that I'm seeing them at their worst as adding hair and headgear always improves the look of them.

Anyway, see how the next few take shape and then I'll perhaps cast a few up and see if they'll do.
Posted by John D at 20:59 2 comments:

Added a couple more heads tonight, and strengthened the chin up a bit on the last one, which was worth a bit more work. 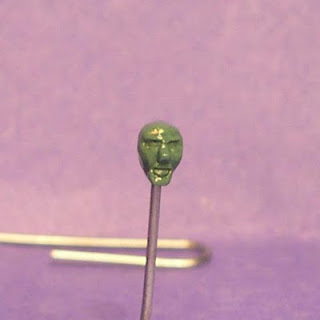 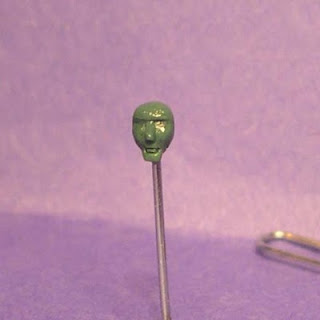 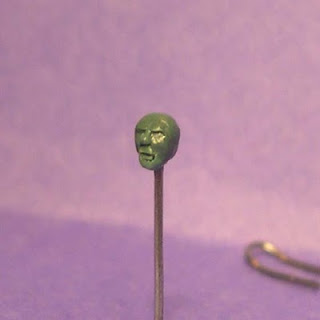 Here's the latest attempt, a definite improvement I think, starting to get a feel for what works and doesn't. This one might be a keeper. 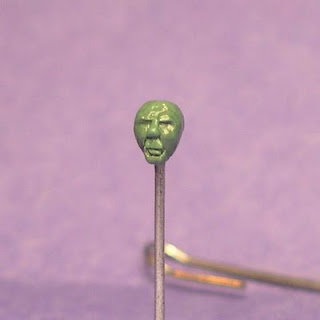 Did a little work on a couple of new heads tonight, I'll post the results up in a day or two once I've finished them

Note the comment about the hussars, and looking back, I see I didn't ever post up a picture of the finished castings. So just for interest, here are the two officer figures, just undercoated and given an oil wash. 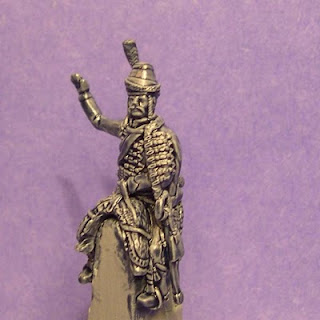 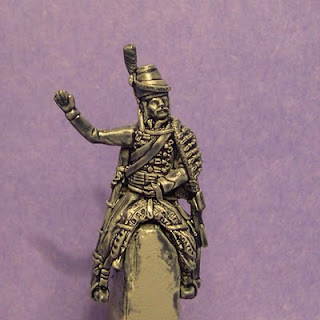 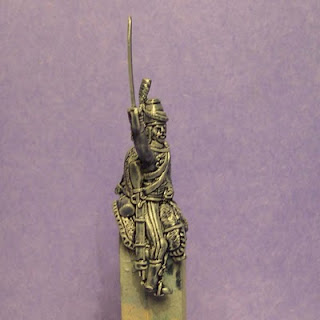 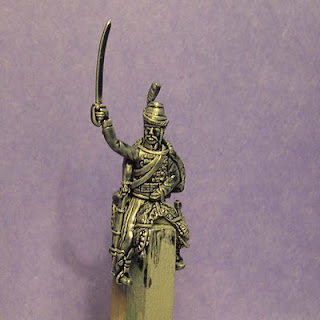 Sorry, don't have any painted ones, started ages ago, got half a dozen done in the paint scheme shown previously, then decided I wasn't happy with it, and stopped. Other things have since taken priority.

Don't want to paint them now, as it will give Doug huge cavalry superiority in our upcoming southern campaign! Ha Ha!
Posted by John D at 22:55 1 comment:

But took the time to do a little analysis of those first three heads, before I do the next batch.

Ok, so the positives, looks like I will be able to do it, I can achieve the detail I'm looking for working at this scale, which is hard to gauge from the photo's, but isn't huge (the heads are in reality only about 4-5mm high)

However, it's also apparent I haven't got it quite right yet.

So assessment of what I think I've got wrong:

1. The heads, well at least the first two are too long, they look stretched just a bit too much. Now I do want thin faces with character, we're not going for a modern "huge pumpkin head" look, so that's ok, but I think I've gone a little too far. Having said that, I haven't added the things that widen the head out, like ears, hair etc, neither have I added the top of the forehead/hat, but even taking this into account, I think a little less elongation is called for.

2. The third head is better in this regard, but it's probably too far the other way, and also the nose is too fat. That added to the "frowning" look makes it all a bit scary (might be good for a "charging/aggressive" figure though!) I could probably fix the frown by adding more of a forehead, but the nose isn't going to get any better.

So slightly less length and chin, go steady on the nose, I'll try that with the next few and see how they look. 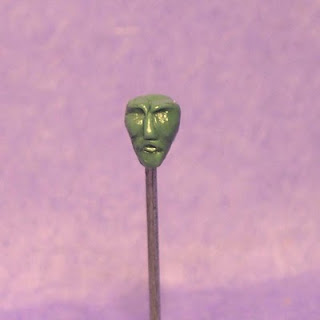 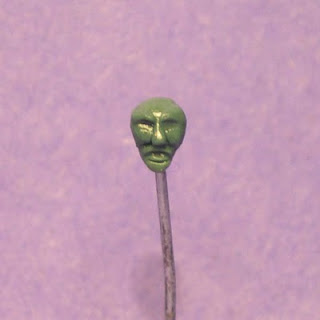 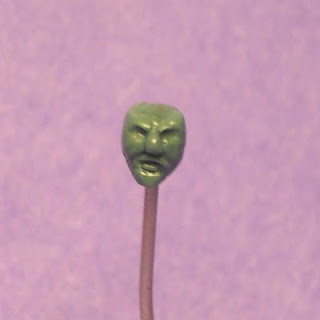 Well, given that this blog is supposed to be about making miniatures, I think I can be excused, as I haven't done any sculpting since then.

Various diversions etc with painting some figures for Napoleonic and AWI mainly.

Been experimenting a bit on the painting front with oil washes, and I like the effect, still learning though. Anyway, the downside to using oils is that they take ages to dry, and to cut a long story short I got bored!

I'd mixed up some greenstuff for use on a couple of AWI Willie command figure conversions, and the sculpting bug bit again. So whilst waiting for the paint to dry I thought I would knock something together.

Been thinking a lot about the figures I've sculpted to date, and whilst I am quite pleased with them, I think they lack a little "spark" in some respects. I think it's because I tried too hard to make them "accurate" and didn't think enough about movement and character. The command figures I've been working on are a good case in point. Suren's sculpting in many ways is "wrong" if you analyse it, but they have that little bit of stardust about them that makes them very special.

Now I ain't ever going to be as good as he was, but I thought I'd have a go at trying to capture the style.

Previously I just used the ebob dolly heads and "enhanced" them a bit. Worked fine, but the end result was "functional".

So I've had a go at sculpting some heads from scratch this time. And here (minus any ears yet!) are my first attempts. I plan to just play about with heads for a while, and try to develop some which I like. I suspect none of the above will in the end make the "cut" but we'll see how things evolve. 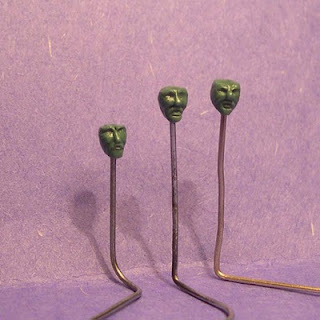 I'll post up some more pics as more heads are done.

Not actually sure what I'm going to end up sculpting yet!
Posted by John D at 23:08 3 comments: