Well, in the end had to admit defeat and park the rest of the infantry for the time being, it was becoming a real chore. So as a break, I've started painting some of the Lauzun's Hussars. Finished the first figure, a hussar, just to test the paint job.

Must admit, this is the first mounted figure I've ever sculpted, and I'm pleased with the results.

Back in due course with the rest of the unit. 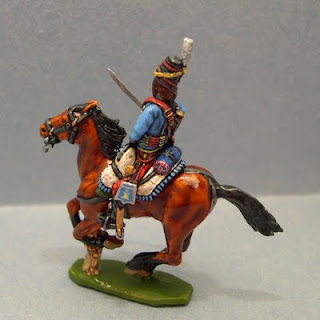 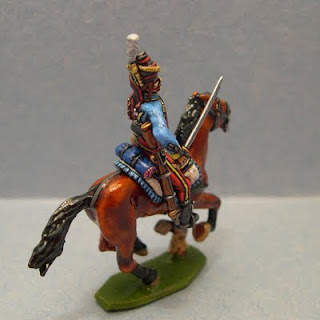 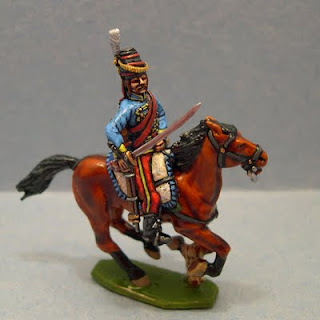 Well, its been an awfully long time since my last post. I must admit I've just been to busy to put any time to this, and on the few occasions I have restarted painting, I've quickly stalled. Anyway, I've finally finished all the fusiliers for the first unit. Still to do the Grenadiers and Chasseurs, along with a couple more command figures. 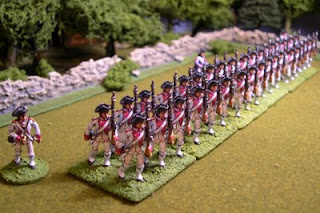 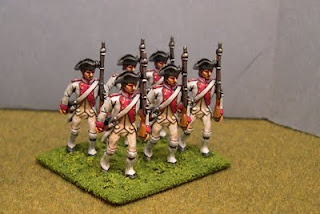 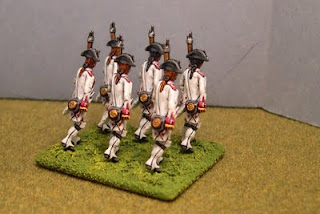 Well finished the last officer, so he'll be off along with his chums to populate a production mould. Then its time to do some painting, suspect the blog will be quiet as a result for a while. 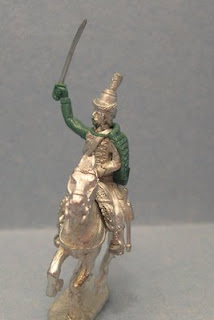 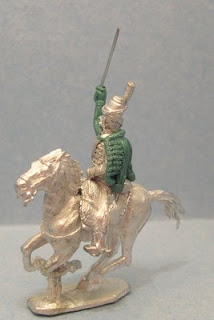 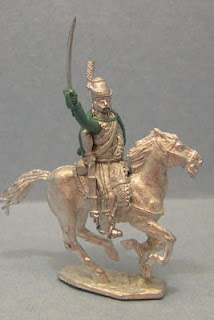 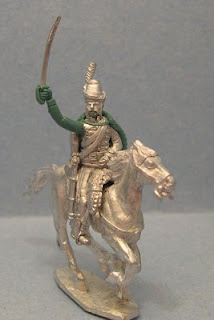 First, thanks for the positive comments about the Hussar's, its nice to get some feedback. I note that several of you appear to be suggesting that you would like some of these figures yourselves. To that end I thought it would be worthwhile putting up a post about the ins and outs of such a move.

For those of you that have followed this Blog from the start, this is very much a personal exercise in attempting to make figures in a style which I can't get commercially. At the same time I'm enjoying learning how to sculpt as an alternative to painting all the time.

A while back I decided that I wouldn't continue with much "drop" casting as, for the number of figures that I want it takes too much time and is pretty dull work. I've therefore gone down the route of using a professional casting service and proper "production moulds" just the same as commercial ranges. I must admit I've been pleased with the results.

In cost terms its not too bad, a bit of a luxury, but acceptable if your getting a reasonable number cast. The "capital" cost of the mould being spread over a number of castings.

However in normal circumstances getting figures cast in a commercial way is a two stage process, you first make a "master" mould and then use this to make castings to populate a "production" mould. You can normally get 16 figs in a production mould. Obviously getting two moulds made in this way costs more, and thus unless you're casting a lot of the same figure (100+) then its quite expensive. Now for a commercial range that's fine, but given that I'm making these for myself I need to think carefully about what I put in any given mould.

For the hussars I had intended to only make one production mould, containing 13 castings of the basic trooper (for which I already have a master mould), and 1 each of the two officers and the trumpeter I'm currently working on, making a total of 16 and filling the mould. Because I only intend to have one each of the other types, I can skip the master mould cost and just put the masters I'm currently making into the production mould. This is a significant saving for me, when you consider I'll probably only ever want a limited number of hussars.

In this format two spins of the mould will give me a unit of 24 troopers, 4 officers and 2 trumpeters along with two spare troopers for casualty figures or such like, which is ideal for me.

Sorry bit of a ramble all this, but I wanted to make it clear the limitations of my current approach.

Now having said all this, cutting to the point.

I have no objection to getting extra figures cast up if people want them, the moulds will be there anyway, so it doesn't make any difference to me, I just need to ask the casters for more figures. For information I think the cost (based on some "back of an envelope calculations") would likely be comparable to commercial ranges like elite or connoisseur. However, unless a lot of people do want the figures it isn't going to be worth my while making up additional moulds, so you'd be stuck with getting figures in the format I've outlined. Obviously if a lot of figures were required then I could rethink the mould format and this would give more flexibility. But as it stands I'm afraid "5 officers only" as an order wouldn't work for me, as hopefully you will be able to see.

If I do go down this route, to be clear, I'm not interested in making any money, just not costing myself anything for doing somebody a favour.

Anyway, I'll await some reaction to this post and reflect accordingly.
Posted by John D at 19:54 2 comments:

Well here is the first officer figure, a conversion from the basic trooper. I intend to use this as both an officer and with a little bit of arm bending and hand modification as a standard bearer as well. For the number of figures I need it isn't worth actually casting both variants, so I'll just cast this figure as is and then modify the required number post casting for standard bearer duties.

One more officer to go and they can go off to the casters for the production mould. 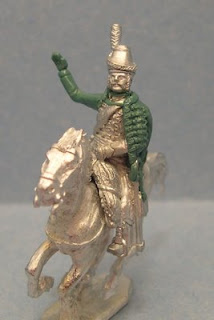 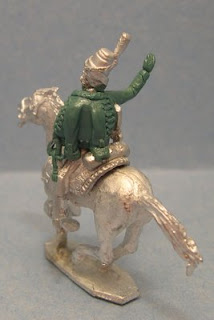 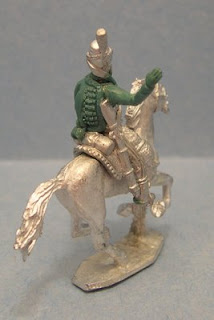 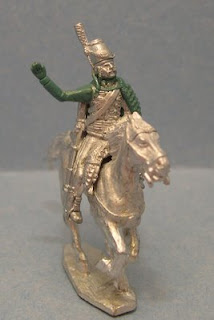 I've now finished the trumpeter master figure as well. I was able to re-use the original legs and saddle from the Hussar figure as they survived relatively intact from the previous master mould. (You can see the "donated parts" in the photos, as the moulding process dyes the greenstuff darker). The upper torso etc is all new however.

I'm planning a couple of officer conversions of the basic hussar (which should be more straightforward than this figure). After I've done that they'll all be going into a production mould. 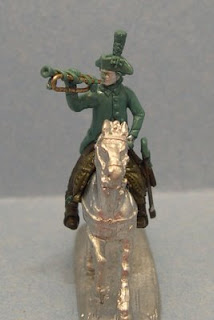 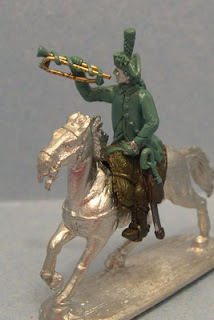 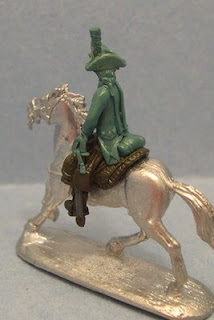 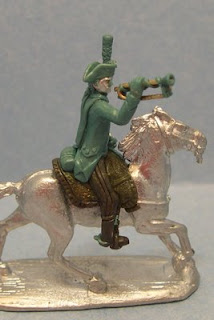 Well, Metal actually. After a slight delay caused by a mix up with the Mould Makers (my fault entirely) I've got a few castings back from the Master Mould of the Hussar Figure. I'll be using this as the main figure for the unit, but want to do a few conversions in order to create a couple of officers and a trumpeter. These will then go into a production mould with this trooper figure in due course. In the interim, I've been painting some of the horses in anticipation. So here is a "raw" casting mounted up on a partially painted horse. 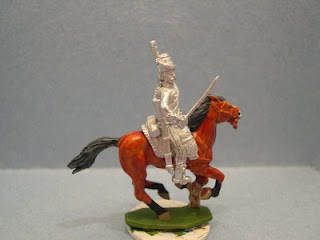 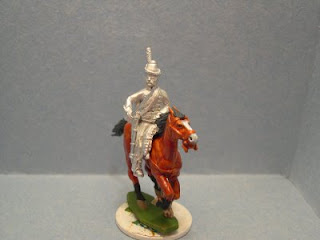 Back from a Break

Well its been a long time since the last post, principally because I haven't been doing any sculpting, and as that's the purpose of this Blog, I didn't see much point in putting up anything else.

Got sidetracked on to some painting, mainly a "Gilder style" unit of connoisseur French Napoleonic hussars. Pleased with the results, but it took a bit of time.

Anyway, got bored with painting, so its back to the sculpting for now. A while back I had made a dolly for a mounted figure, so I decided to have a go at taking one through to completion. First selection was a french hussar type, of the sort that could be used for Lauzun's Legion or similar units. It's basically a standard French Hussar outfit with no pelisse.

Anyway, here he is, officer and trumpeter etc to follow, once I get round to it. 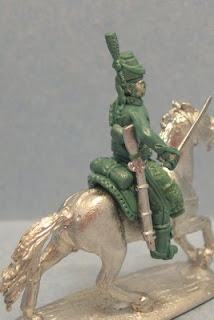 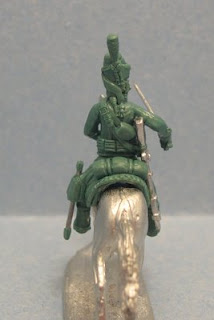 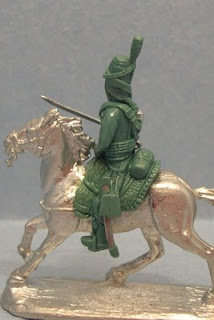 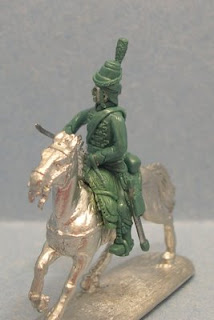 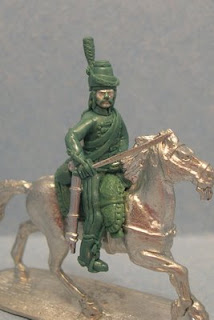