Starting on the detail

With the core blocks of colour completed, it's time to start working towards finishing the figure by adding the detail. This stage of the process is very important, as, done well, it can help us deliver the third key element we are looking for, the "definition".

My way of making the figure "pop" is to be quite focused when doing the detail to ensure that you paint in such a way that it leaves an effective "edge" between different colour areas on the figure. In the past some folk have thought that I lined figures in, in the way that Peter Gilder used to do, I don't, but the principle is the same. By creating a clear colour boundary and contrast on the edges of colours, you define them more clearly to the eye and make the figure much sharper and visually attractive.

If you don't do this than figure can often blend together in a way that means they get lost and it all just merges into a bit of an undefined mess.

The belts have been painted in with Foundry Buff Leather 7a, then 7b and finally with Foundry Base Sand 10c. Wherever there is an edge, eithet between the belts or the coat, I've ensured that its sufficiently dark to define the edge, in places this has meant a small amount of a mid brown colour being painted in.

The cartridge box was painted with Foundry Spearshaft 13c, allowed to dry and then washed over with Burnt sienna oil, I find this gives a nice tanned leather effect. The canteen painted in a dark grey then highlighted with some Coat d'arms Gun Metal 142, and then Silver 220.

On the buttons, these are painted in Foundry Spearshaft 13a, and then gold acrylic applied on top. I make sure that the base brown colour covers the full button and a little bit more so that when the gold is applied it leaves a very small "edge" of brown behind, This helps really define the button and make it pop. Look at the buttons on the coat, the coat is yellow and the buttons gold, without doing this they would just be totally lost. It takes a little practice, but makes a huge difference. 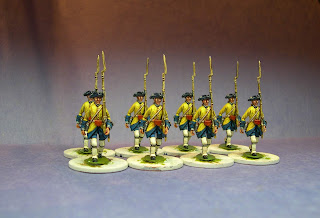 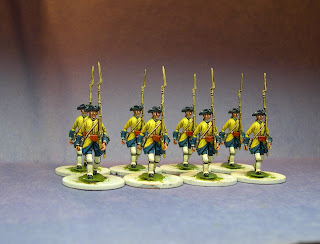 With the detail now done on the core figure, next time I'll move on the the musket, hat, hair and complete the figure.

They are looking splendid
Clive

Thanks for the lesson John. Still playing catch up, a bit behind but so far so good.
The Coat d'arms ink wash chestnut is a great find and gives really good facial definition and so easy to use. Why have I struggled with acrylics to give washes for so long !

Thank you, it's just a matter of practice I suppose ....

Graham H, Glad the Coat d'arms chestnut ink wash worked for you, see, it was worth running in to me at Falkirk! :)