A bit more work on the figures has now progressed them to the stage where the main core colours have been completed.

In my mind, this achieves for us two of the three criteria that I first identified as objectives for the figure painting. Namely, we've got good depth and strong bold colour. My camera work is amateurish ( a single overhead lamp on my workbench) and it's a very old digital camera, so the images shown don't really do the figures justice in that respect. "In the flesh" the colours have a really nice depth, vibrancy and tone to them, but are still quite subtle in overall look.

So, the steps since the last session were .....

The blue was done using acrylics, mainly because I find oil washing on deep blues doesn't work that well, I find it's just a bit too translucent. So, I use a three layer approach using Andrea paints blue paint set. I really like these acrylics, they have good pigmentation and dry quite "flat". In this case it comes as a six tone set, my technique here was to go from 2nd shadow as the under layer, with the base colour on top, then moving to the 3rd highlight to finish. Effectively I've accelerated through the six available tones using the ones on either end stopping off in the middle along the way. It creates a fairly strong transition, and on a bigger surface are you might want to introduce a few more of the intermediate tones, but at this scale it works fine.

The gaiters were then completed by highlighting them with Vallejo Ivory 005. That pallete (using the wiped off Gold Ochre oil wash) is my "white" and is the white I use on all my figures. It's warmer and less harsh than many you will see.

Details on the gaiters were then painted black and then highlighted with a suitable mid grey for the straps and light grey for the bone buttons.

Lastly the yellow was completed by highlighting with Foundry Yellow 2c 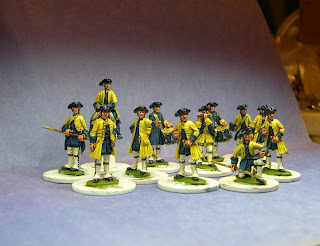 So, now we have the core figure well on the way, further steps will be to add the detail, doing this in the way I'll show will provide us with our last element .... the definition

Thanks Clive, Adding the details will improve them a lot more ....